Playbook: How the Carolina Panthers confused the Patriots

When the Carolina Panthers faced the New England Patriots, no one gave them a chance against the defending Superbowl champions. Coming off a demoralizing loss to the New Orleans Saints, the Panthers had more questions than answers surrounding them. The Panthers offensive line was a turnstile against the 32nd worst defense in the NFL, handing Cam Newton one of his worst games ever.

There was no reason at all to consider the Panthers contenders, and rightfully so.

However, the Panthers showed up. Offensively, Cam Newton returned to 2015 MVP form as he finally had some room in his pocket. Winning 33-30, the Panthers QB was 22/29 for 316 passing yards and 3 touchdowns with a 130.8 passer rating. OC Mike Shula also deserves credit for such an incredible day, as his playcalls had the Patriots defense in shambles all game.

Sure, the Carolina Panthers did go against the worst front-seven in the NFL. No one’s disputing that. However, the Panthers deserve credit for coming in with a good game-plan.

Watching the broadcast, one term used a lot is how “confused” the Patriots secondary was. While it was apparent the Patriots defense were clearly doing bad, the explanation behind the “why” isn’t that apparent at first glance. This write-up hopes to clarify the audience with a better understanding of just what happened.

For this breakdown, the plan is to simplify most events and leave technical schemes/terms out so the large general audience can have an easier time understanding what’s going on. While the bunch formation will feature a deep explanation, the rest of the breakdown will revert to simpler terms and explanations that don’t require a deep understanding of football.

So, without further ado, here’s how the Carolina Panthers confused the New England Patriots secondary.

One particular formation the Panthers ran a lot with success is the bunch formation. A concept originating from college football, the idea consists of bunching a group of receivers at a certain area of the field to flood the defense. 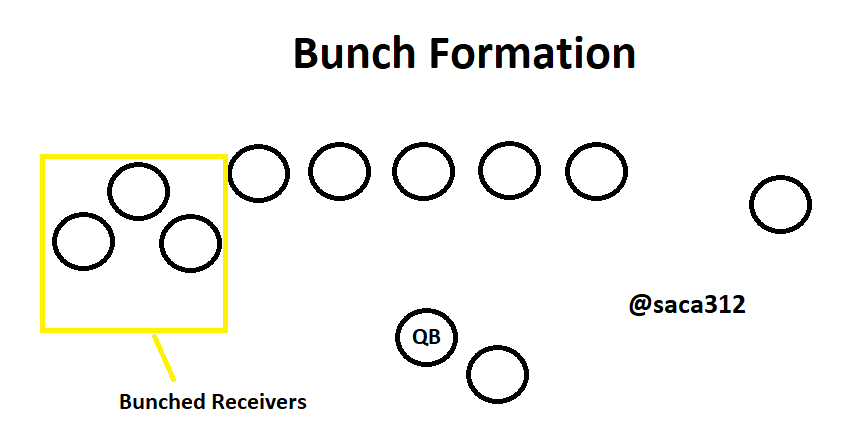 The idea of this formation is to both help the quarterback with simplified reads alongside confusing the defense with a bombardment of routes. The formation allows the offense flexibility in creating mismatches while creating space against the defense. When compressing the bunch, the defense often leaves room outside, while splitting the bunch wide creates space.

For example, an offense could take advantage of zone coverage with the bunch formation by grouping three wide receivers wide on an area with two defenders. Essentially, the offense would “flood” that area of the field out of the bunch with someone guaranteed to be open. Against man coverage, the bunch could create “picks” or traffic that stalls the defense and gets someone open.

In simpler terms, this formation can cause confusion for the defense featuring a group of receivers bunched somewhere on the field. That’s exactly what the Panthers used to confuse the Patriots defense on multiple occasions. 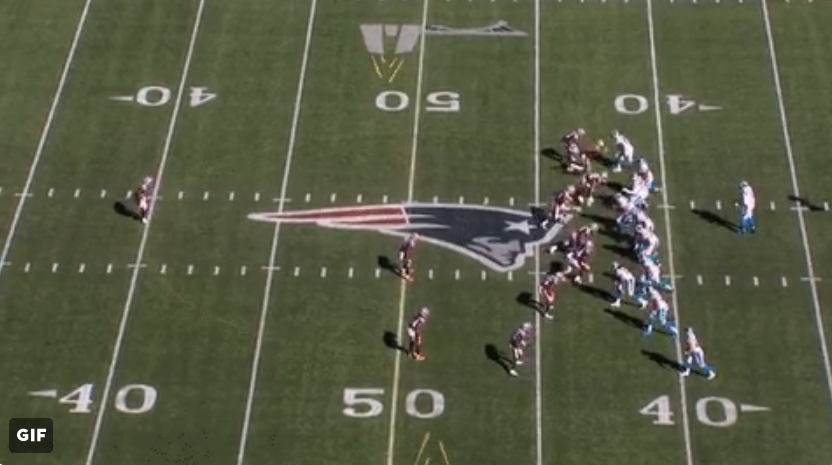 On the Kelvin Benjamin wide open catch, the Panthers are in a bunch formation to the left side. They have three wide receivers clumped together in that area with Christian McCaffrey on the outside nearby.

Patriots show man to man coverage with a single high safety up top. The defense has four defensive backs covering the four receivers on the left side. At the snap, the Patriots turn out to have five defenders covering five Panthers receivers.

What’s interesting is the confusion this creates for the Patriots secondary. CB Gilmore commits to the inside route alongside Rowe. The Patriots are unaware that the outside is completely empty with both those corners going inside.

As a result, Benjamin breaks loose on the corner route for an easy big play. No one is there to cover him, and the high safety barely catches him deep down the field.

As seen, the bunch formation turns the Patriots secondary into a frenzy of confusion. Patriots cornerbacks Gilmore and Rowe show disconnect in their assignments, letting Benjamin free outside. The Panthers take advantage and reap the benefits.

The Panthers once against go to the bunch formation on Devin Funchess’ wide open touchdown. How they created such an opportunity was simply fantastic.

To simplify, the Patriots are in man coverage against the Panthers bunch. Funchess motions from the right side to the left and lines up outside with the bunch. The middle receiver of the bunch is responsible for the inside route, while Ed Dickson and Devin Funchess both go to the left.

What’s very interesting is how unprepared the Patriots secondary were. They appear jumpy and unsure pre-snap, with guys issuing out orders and shifting around. Eventually, the Patriots settle with Stephon Gilmore responsible for the inside route, while their inside corner Rowe checks the outside.

This in it of itself already creates a mismatch opportunity for the Panthers, but what happens afterwards is even more weird.

As seen, the Patriots were completely unsure what was going to happen. The Panthers capitalized on the confusion and weird assignments with an easy Funchess touchdown.

The breakdown seems to occur with Rowe expecting Gilmore to switch off to Funchess. Coming down, he stops right where the middle receiver would likely go with hopes that Gilmore switches off to the outside to cover Funchess. However, Gilmore stayed put and clearly did not know his role on that play.

The Panthers took advantage of a confused secondary from the bunch formation, and the results were very good. The Patriots were unable to adjust or communicate well.

The bunch formation is a decent formation if an offense is looking to create confusion for the defense. With its diverse set-ups and ways of attacking alongside its large scope of uses, it can be an effective formation against undisciplined defenses. The Panthers took advantage of the bustle and confusion of the Patriots and hit them right where it hurts.

Shula called a very good game, mixing in a diverse set of calls that flowed well with the game. While some (myself included) question  his “run up the middle” calls on 2nd and long, he did very well otherwise to expose the Patriots defense. While the Panthers fanbase gives him a lot of flack, he certainly showed promise this past weekend.

Let’s hope to see even more success like this from the Panthers offense going forward.

Writer for the CarolinaHuddle. In-depth analysis, breakdowns, and articles all related to the Carolina Panthers.