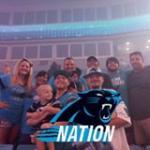 Brady missed Senior Bowl so he's in Alabama, Rhule and Fitterer with Fields and the new QB coach Sean Ryan is with Mond.

Rhule got to coach Mac and Mond, so it makes sense he wants to see Fields.

Given Rhule has already seen Mac Jones quite a bit, in this particular case, I wouldn't read TOO much into it.