CBS Sports gives Carolina a C- for the Draft

By chknwing,
April 30 in Carolina Panthers

There are few things more useless than immediate draft grades. Pete Prisco is one of them.

I said that 2021 seemed to be very, very heavy on building roster depth and very, very light on starting caliber players. That seems to indeed be the case after a limited sample. With such a bad 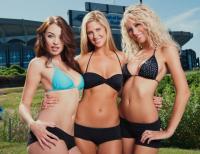 If you think there's even a chance a guy could be a franchise QB you take that shot. The importance of finding that guy holds infinitely more value than a freaking mid round draft pick.