Case for Koochie as our 1 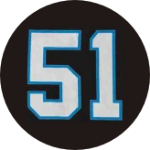 Also that was the first shutout of any of our goalies this season. Anderson had 4 last season, Raanta with 2. Kooch has a lot more season left to equal or surpass either one.

I've been following Koochie's career in Russia for a while, pretty much since we drafted him. He's been great for us so far but I do think he needs more time fine tuning his technique and angles befor

Koochie as our 1 from this point? Our young guy is ready for full time duty.