Olsen should give the ball to OBJ...he acts like a child 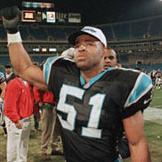 Let's have a moment for all of the Panther fans that passed away today from having a heart attack.

OMG the Giants beat an undefeated team in 1934?? Might as well not even play